In 1995, ARACO gets involved in competition in class T1 as in T2 with hardly modified Land Cruiser of series. These cars of factory carry out several consecutive years of doubled victorious in group and are classified in particular on Dakar. In 1998, # 100 replaces the famous 80. Too heavy, too fragile, that’s what they said about it. 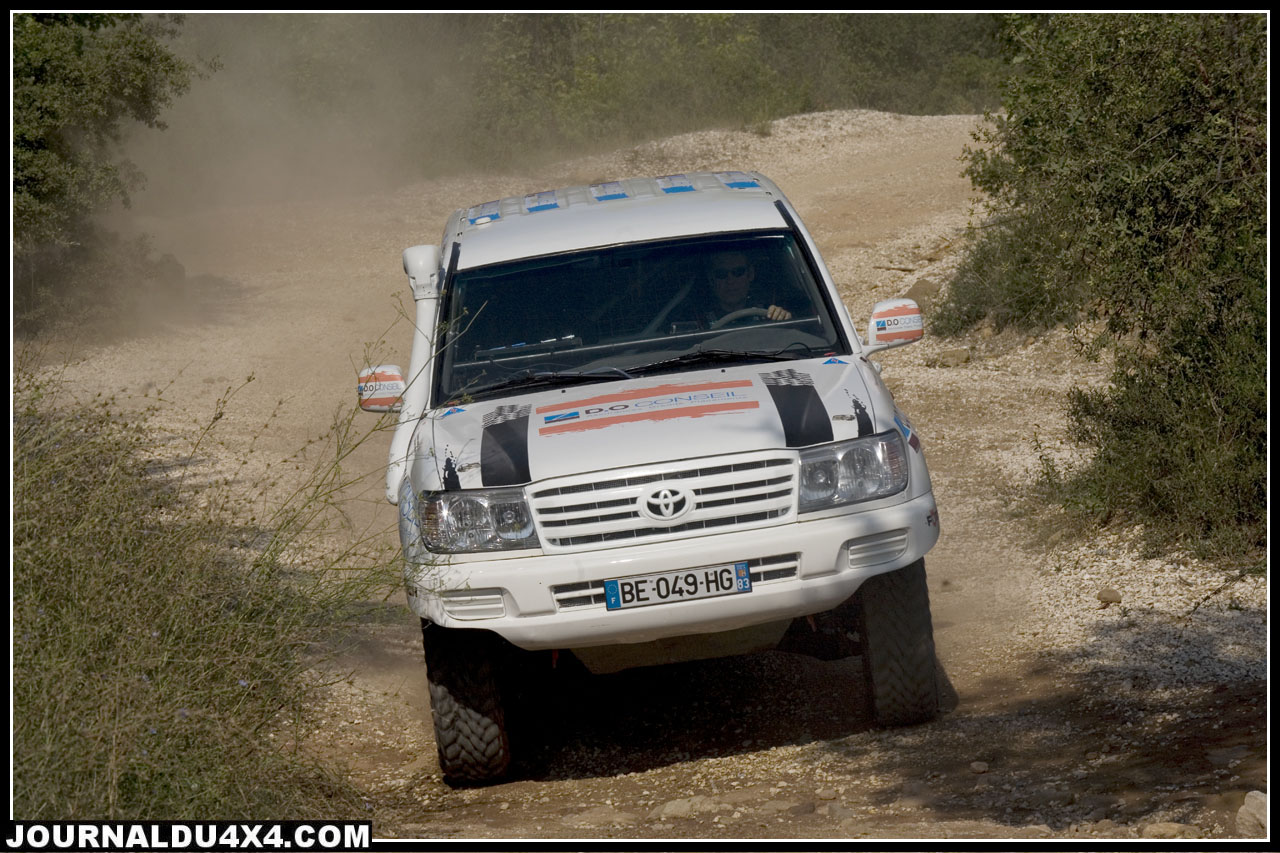 However, faced with competition from Nissan and Mercedes, the red and yellow cars have always drawn their own in the game. Eleven years later, two ex factories will be committed on next Morocco and the chances are high that they will renew the exploits of their youth. 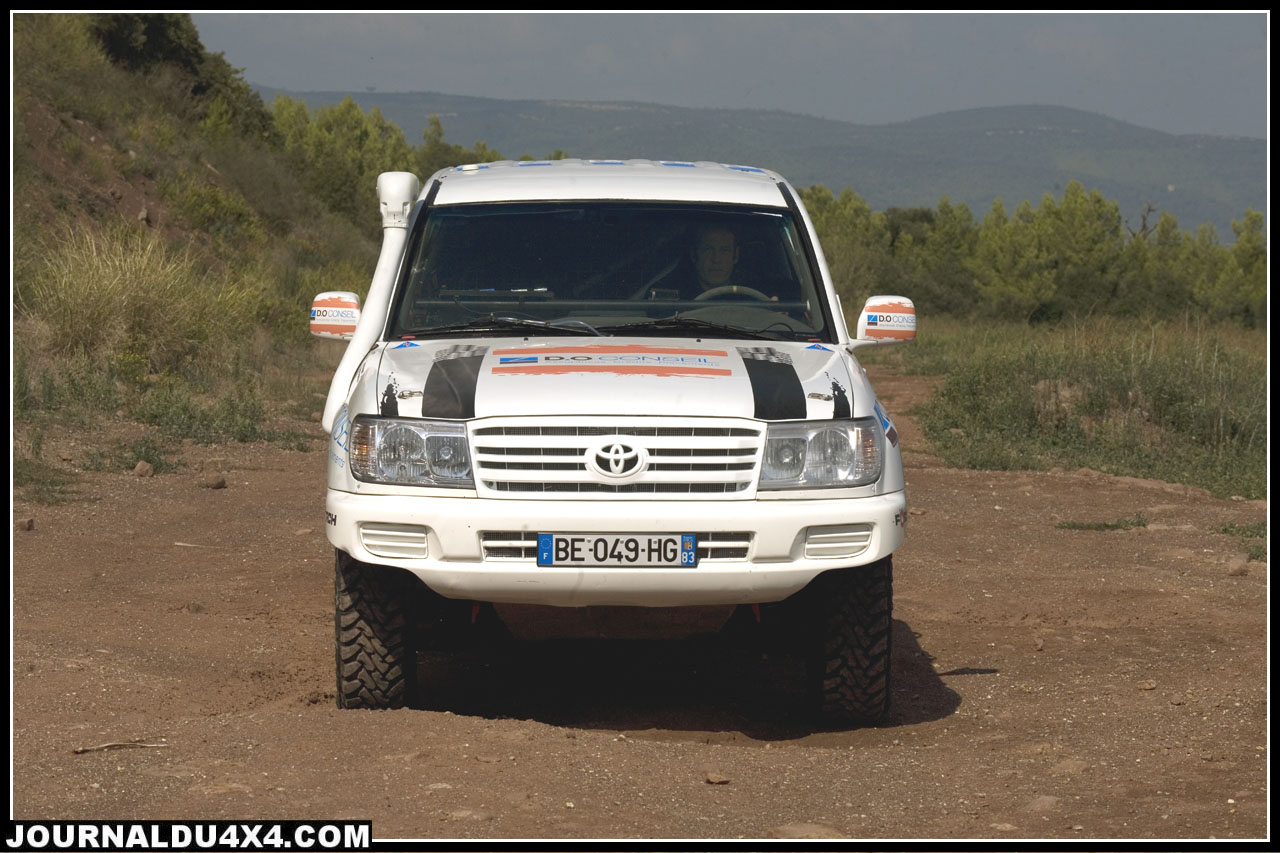 On the occasion of the 98 edition of the rally of the Atlas, Araco who already gets involved since a few years in the events of Rally Raid mainly with HDJ 80, decides to commit two serial Toyota 100 for the first time, the new spearhead of the Japanese brand, Received directly from Japan at the beginning of the year, the first 100 HDJ is entrusted to the DMC workshop for its preparation. 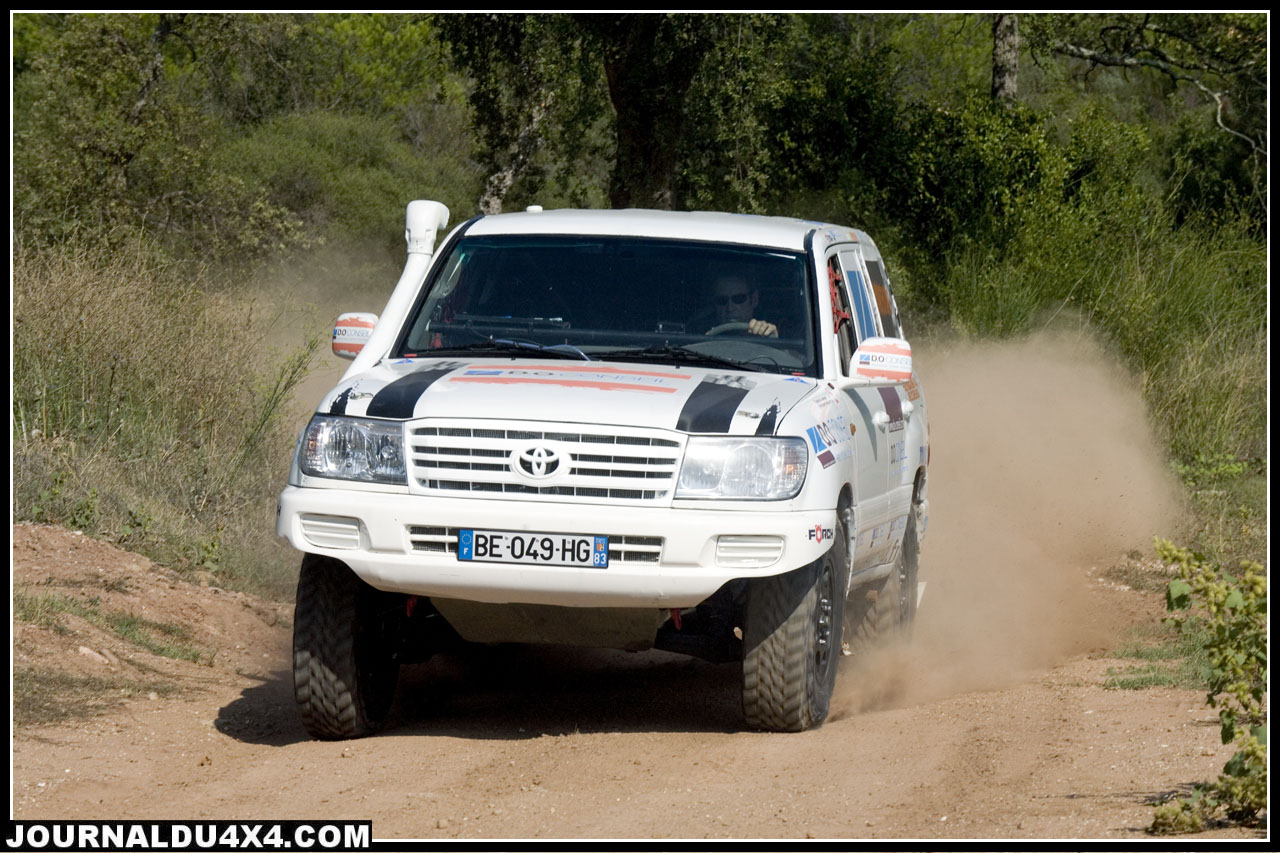 This vehicle, certainly a pre-production model or, as some sources, one copy for the crash tests, is provided with a rigid axle at the front and does not have all the equipment listed on models marketed. With a rich experience on HDJ 80, Mathiot Denis prepares the car must be entrusted to Gérard Buckwheat for both preparatory races le Rallye de l’Atlas( The Rallye of Atlas) then les 24 heures de Paris( 24 hours in Paris). These two test in race will make possible to learn the lessons necessary to to construction from the cars which will be committed in class T1 as in T2 on next Dakar.

The victory of class (1st diesel) gained by crew SARRAZIN/FUJISAWA will be the first of a long series of success as well in group as in class. Between 1998 and 2000, several Toyota HDJ 100 thus left the workshops of DMC then of Gennevilliers (Toyota France Competition). Among these, the HDJ 100 is belonging today to Bruno Sandrini. Vintage 2000 on the car license, this racing car is the one that was entrusted to Jean Jacques Missed, the official pilot of Toyota at that time. For its 1st Dakar, it will finish 27th gaining on the way its class.

To the reception of the car in Le Havre, this one was directly sent at Denis Mathiot for a complete disassembling for its preparation. Thus, body and chassis have been reinforced in the workshop of Lagny but, moreover on this last, certain significant points received particular care. The reinforcements are steel plates 25CD4S as different parts designed on the level of the suspension. Indeed, as on the HD 100 presses considering also at Hakken Raid, shock absorbers are among two by wheels. But it is also necessary to underline the anchorings of torsion bars in front and the chapels of rear springs ( KAYABA) was entirely remade. Regarding the eight shock absorbers KAYABA specially conceived for these Toyota of running, those are adjustable according to the embarked weight, of the grounds met and the preferences of the pilot. As we will see it this adjustment can be refined in a very precise way.
Reinforcements and Protections 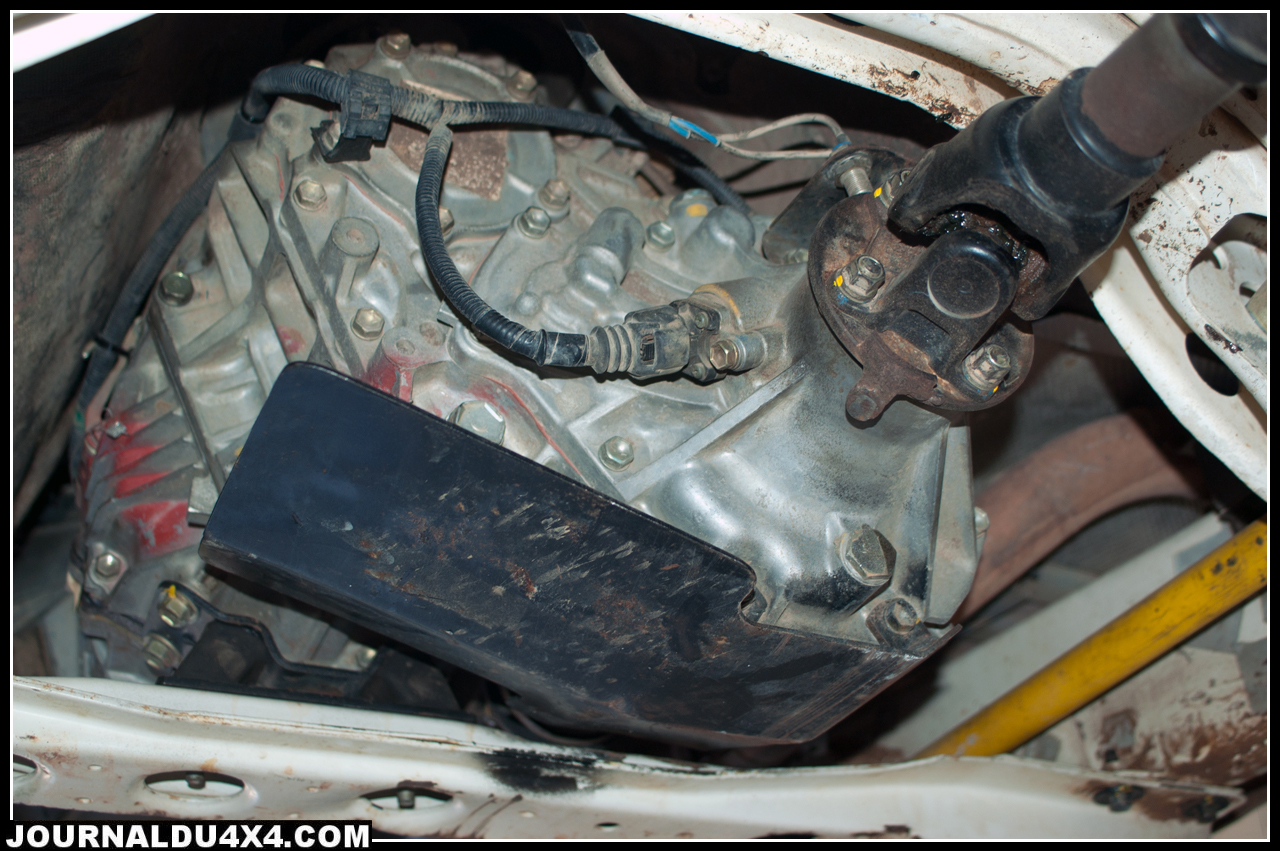 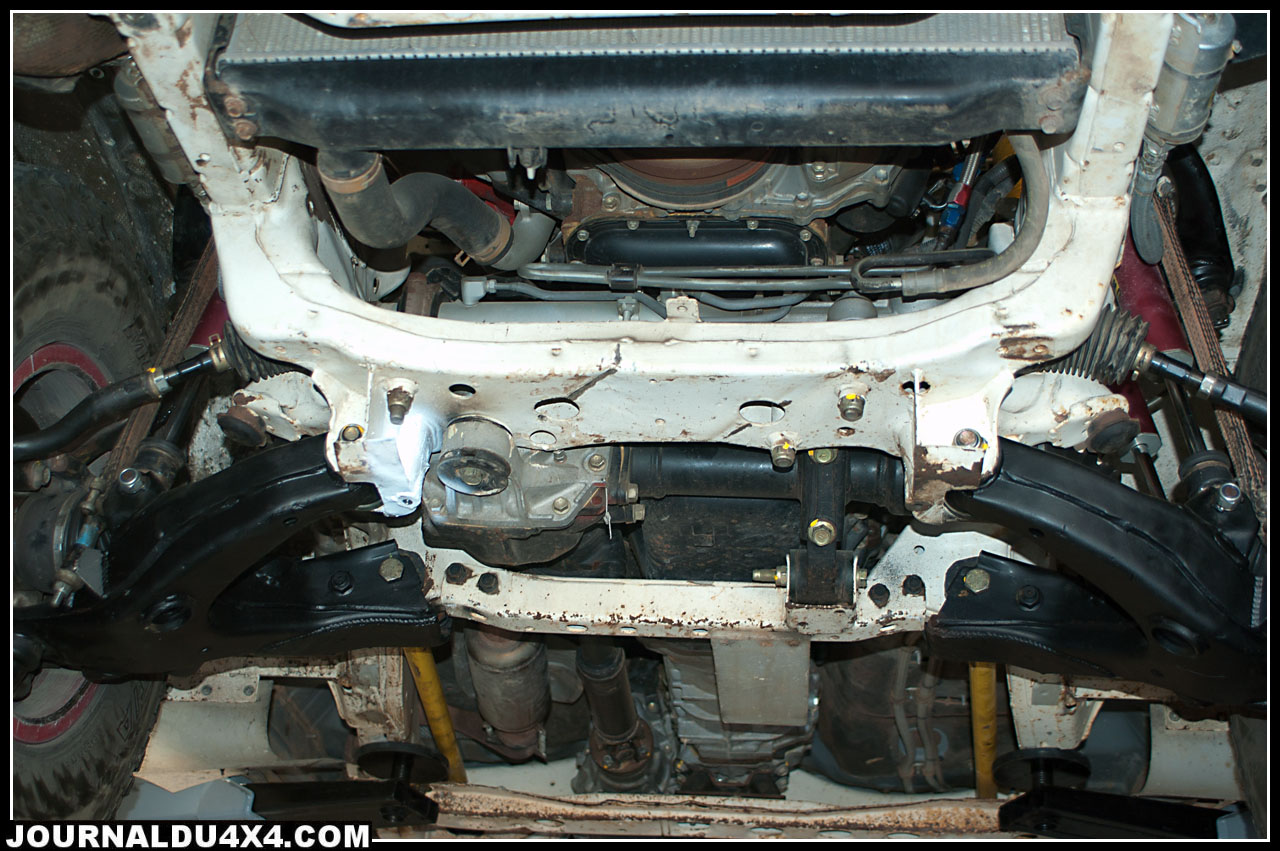 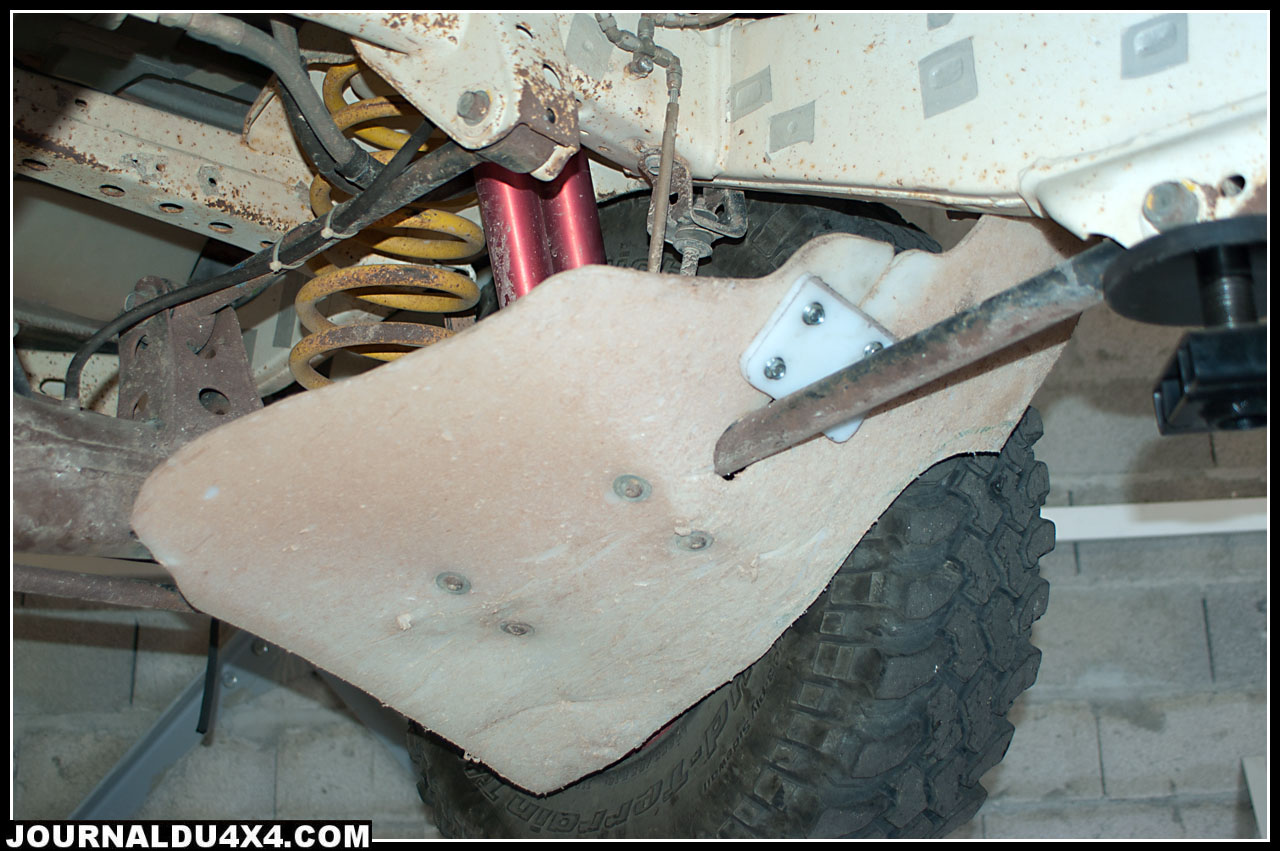 For its part, the engine was completely disassembled for inspection. Controlled rooms and games, it was then reassembled. According to the regulations FIA, the admission received a flange of 45 diameter and the turbo is is regulated with a pressure of 1.2 bar after the intercooler. A passage to the bench allowed a last control. The 4.2 L developed then more than 270 CH.

Before every running, by precaution, all the mechanics engine, gearbox was changed for the new. Thus, the HDJ 100 of our test that shows less than 100 000 km to the meter, now in its third mechanical!

The racing car is equipped with the same accessories as the vehicle presses tested in May. Even snorkel Toyota in carbon fiber easily removable for the assistance in running, the same hydraulic system at the level of brakes, durits typify aviation instead of the original pipes.

In the cockpit almost an identical dashboard and even instruments of controls (thermometer, temperature and pressure turbo) the common points are numerous and for cause the assistant was the same. 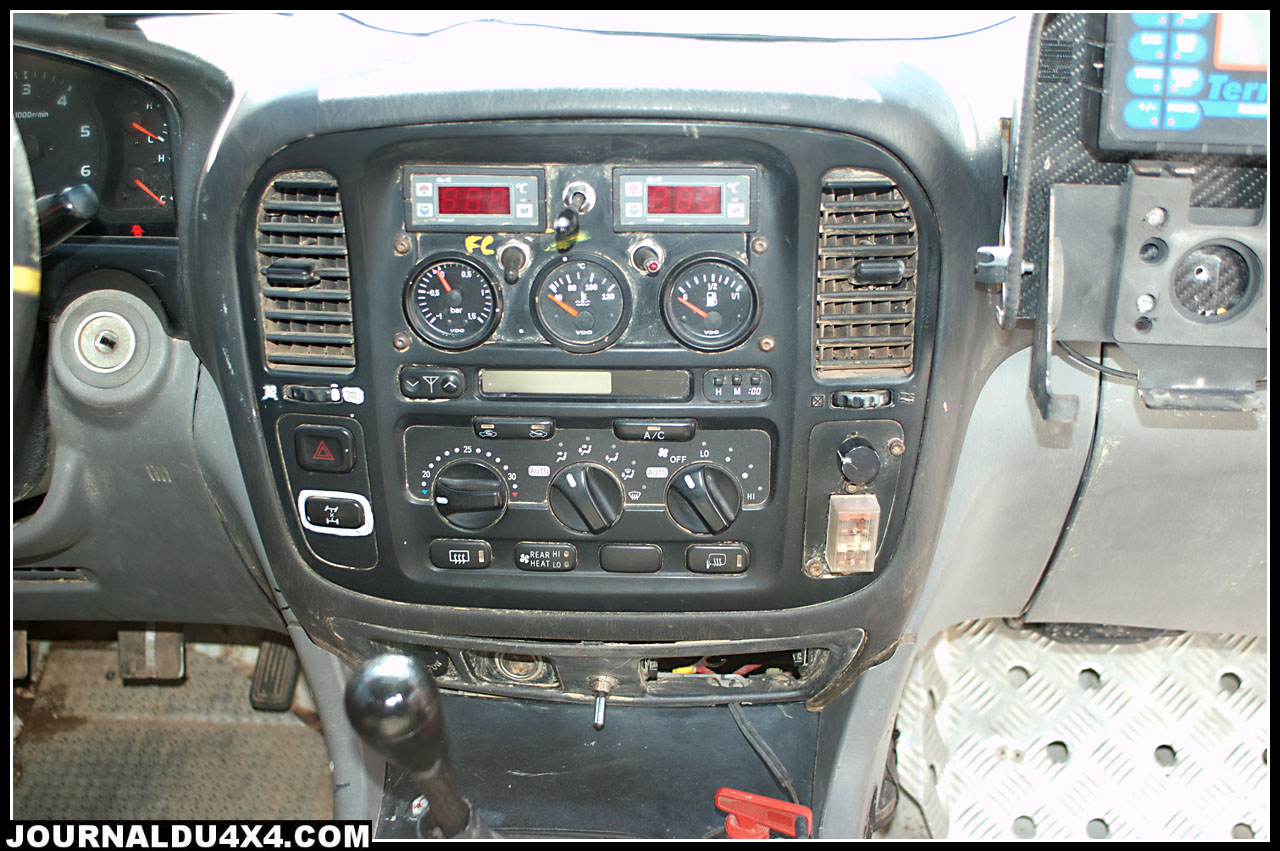 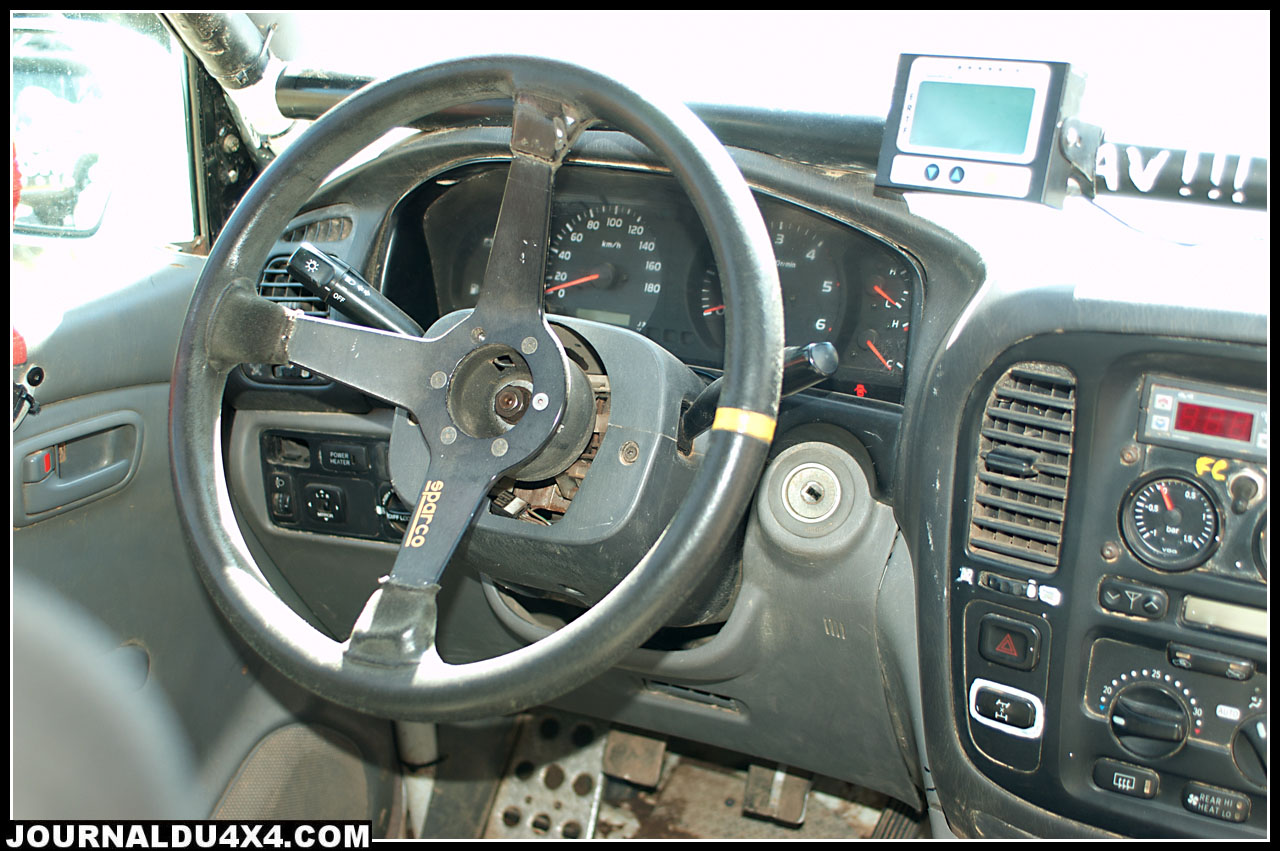 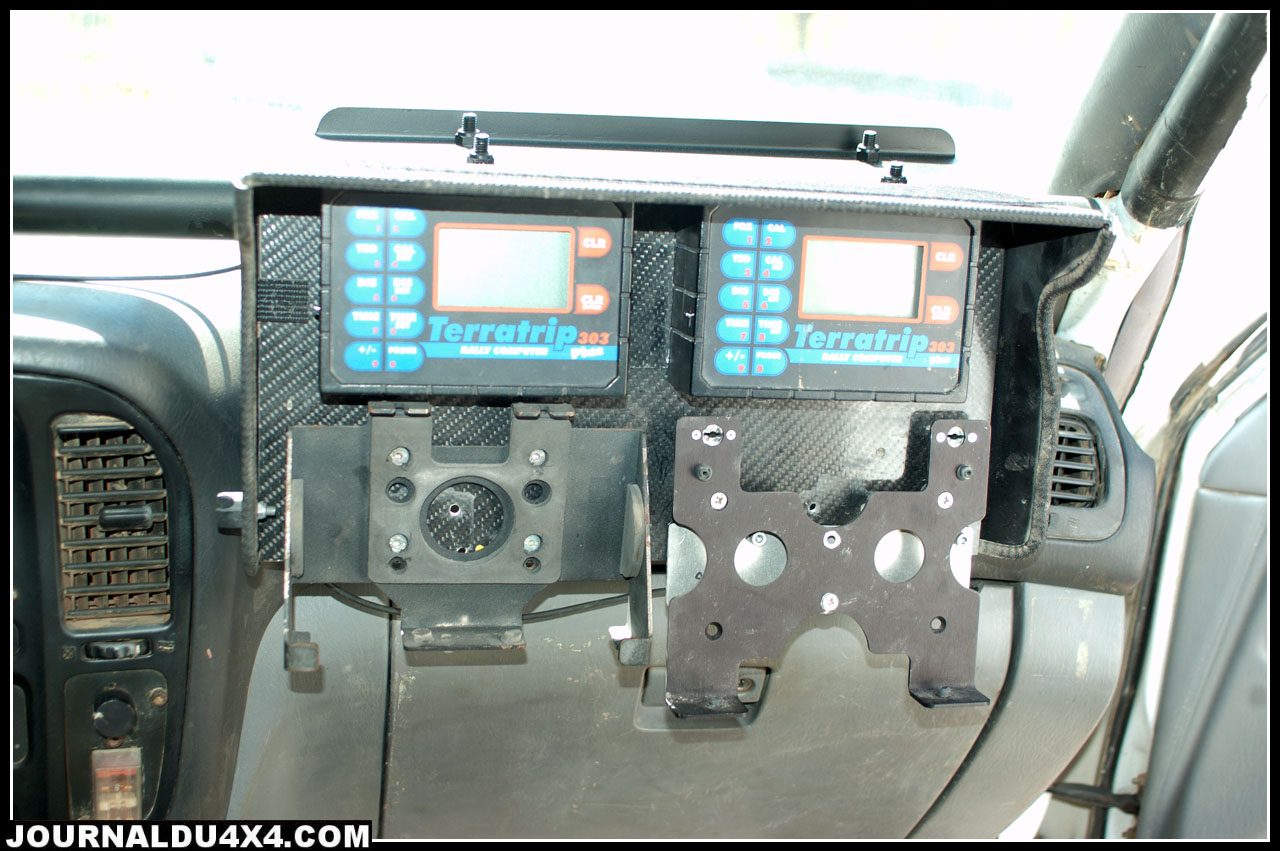 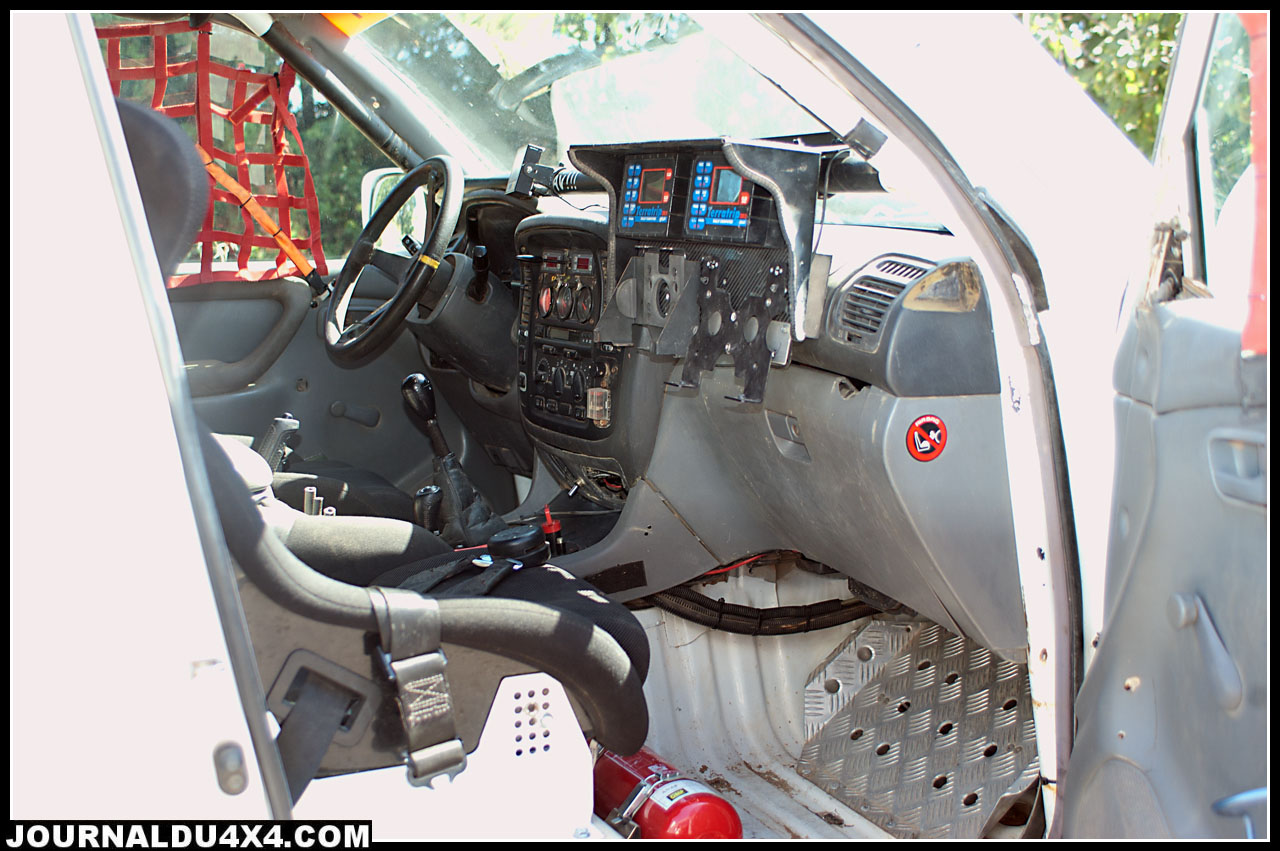 However Bruno Sandrini brought some bit extras at the level of accessories like the establishment in the trunk of a Viair compressor with a cylinder placed under the case. 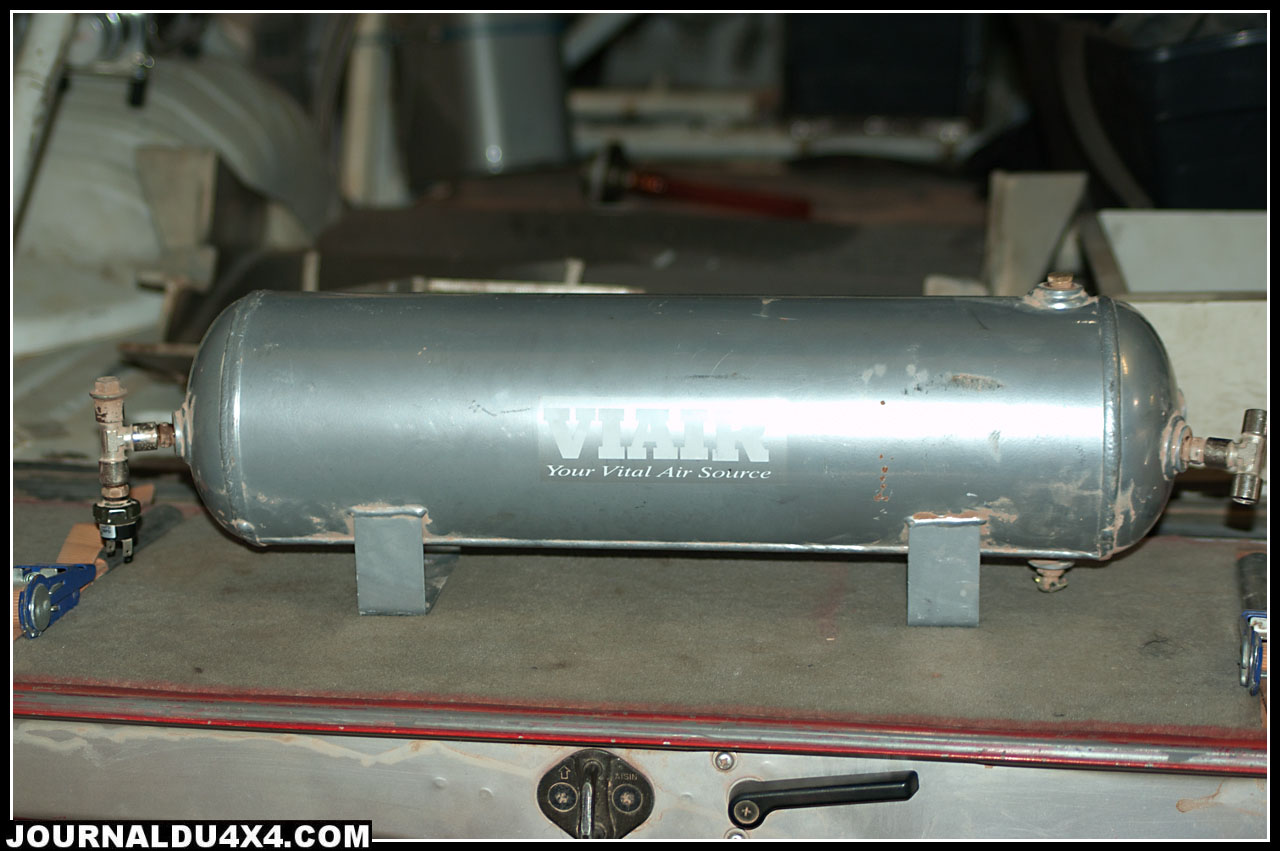 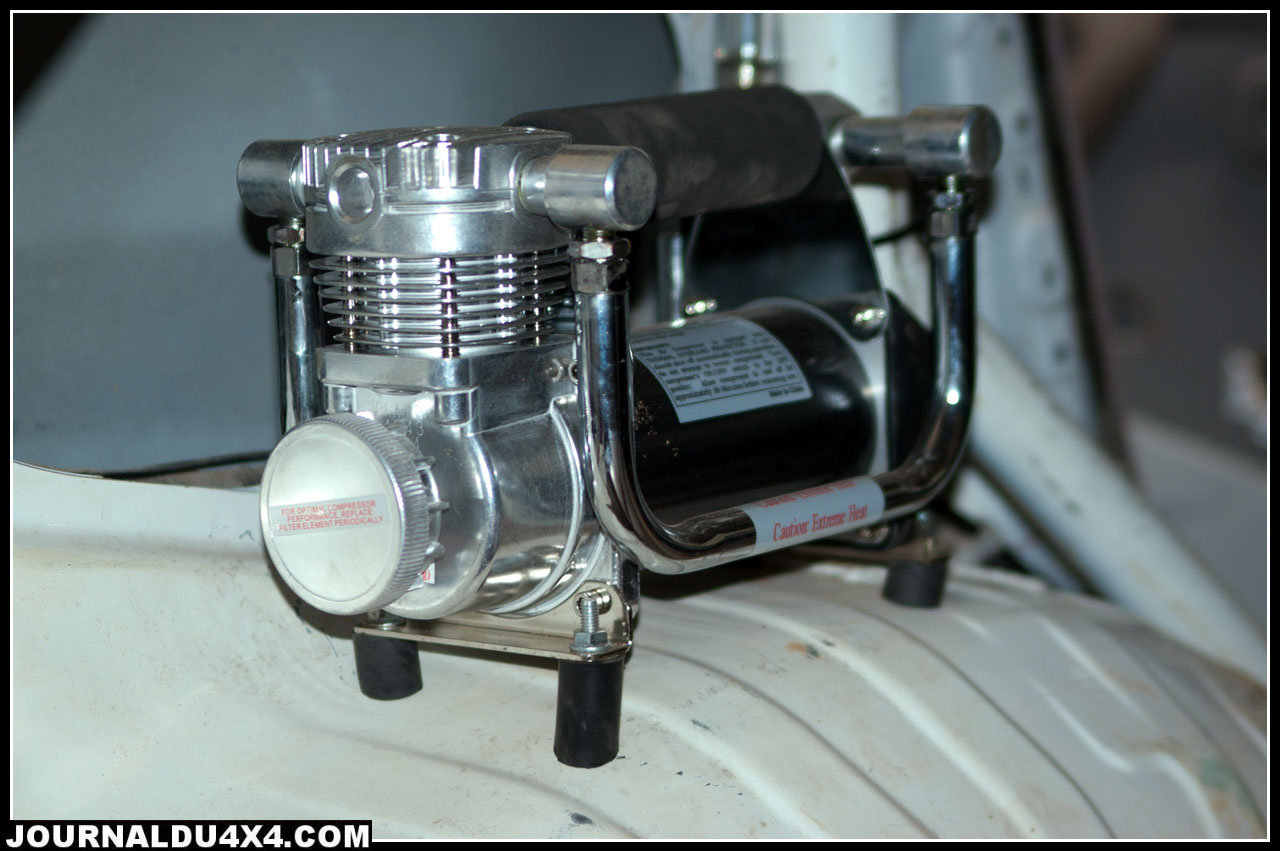 Eleven years after experiencing the glory (relative in front of protos Mitsubishi who they made the scratch) two HDJ 100 ex Araco starts again of the service in running.

Little twist to the story, Bruno chose to trust Toyo as regards pneumatic. 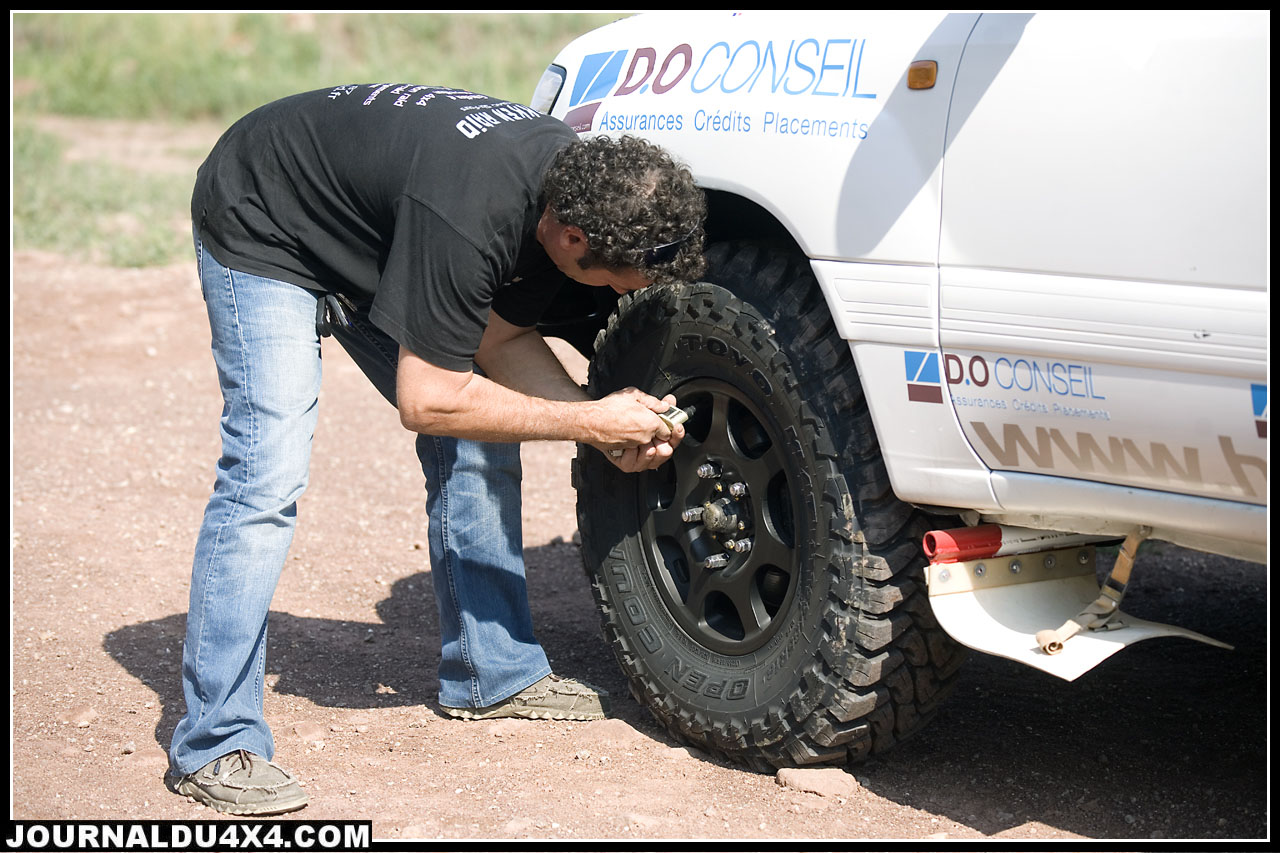 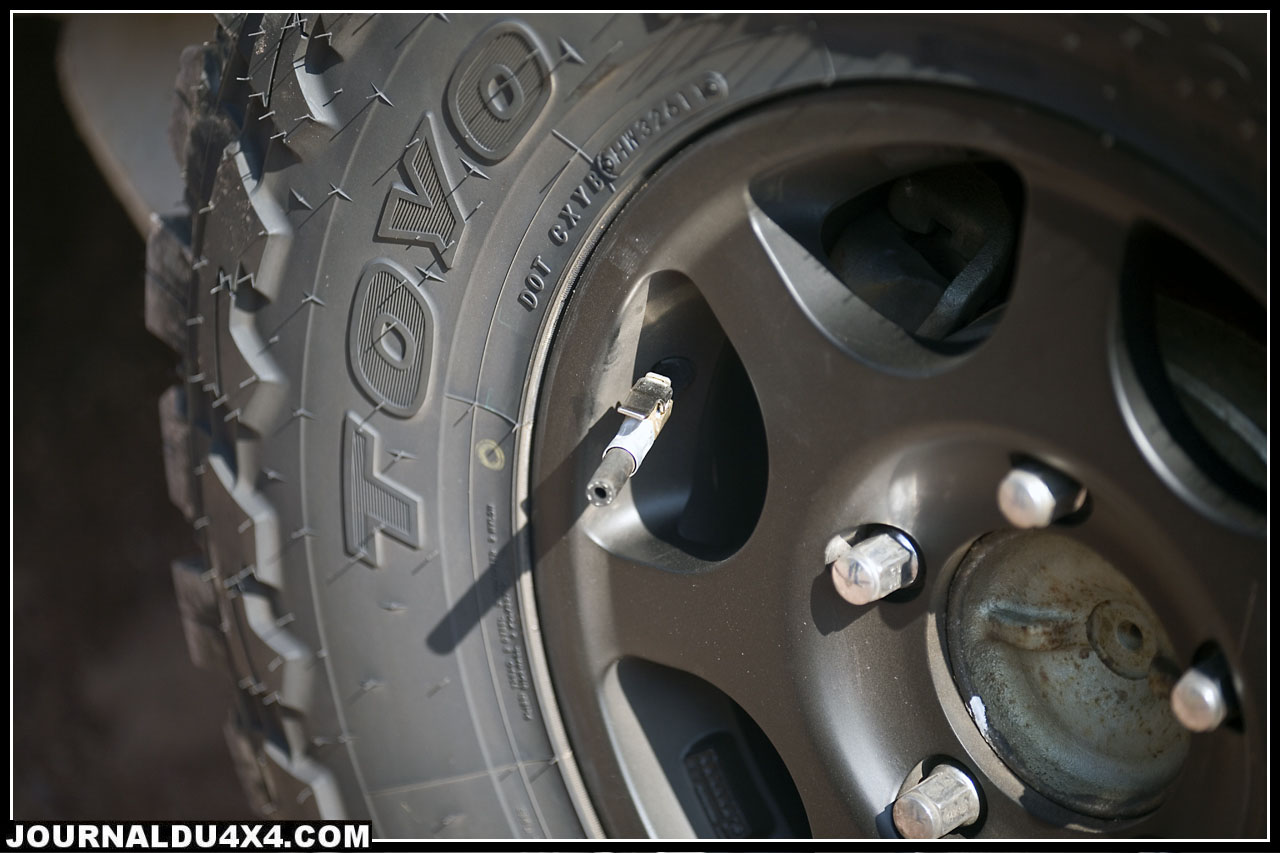 Thus will be Toyo Open Contry 255 80 x 16 assembled on rims Speed Line which will be tested during the next Morocco. Inflated to 2.7 kg, they are too hard and Bruno went down the pressure to 2 kg (cold) to obtain a pressure of 2.3 when they are at temperature. According to Bruno Sandrini, these pneumatic “a little balloon” should be very versatile in terms of pressure, as comfortable on the track, properly inflated on the sand at lower pressures. 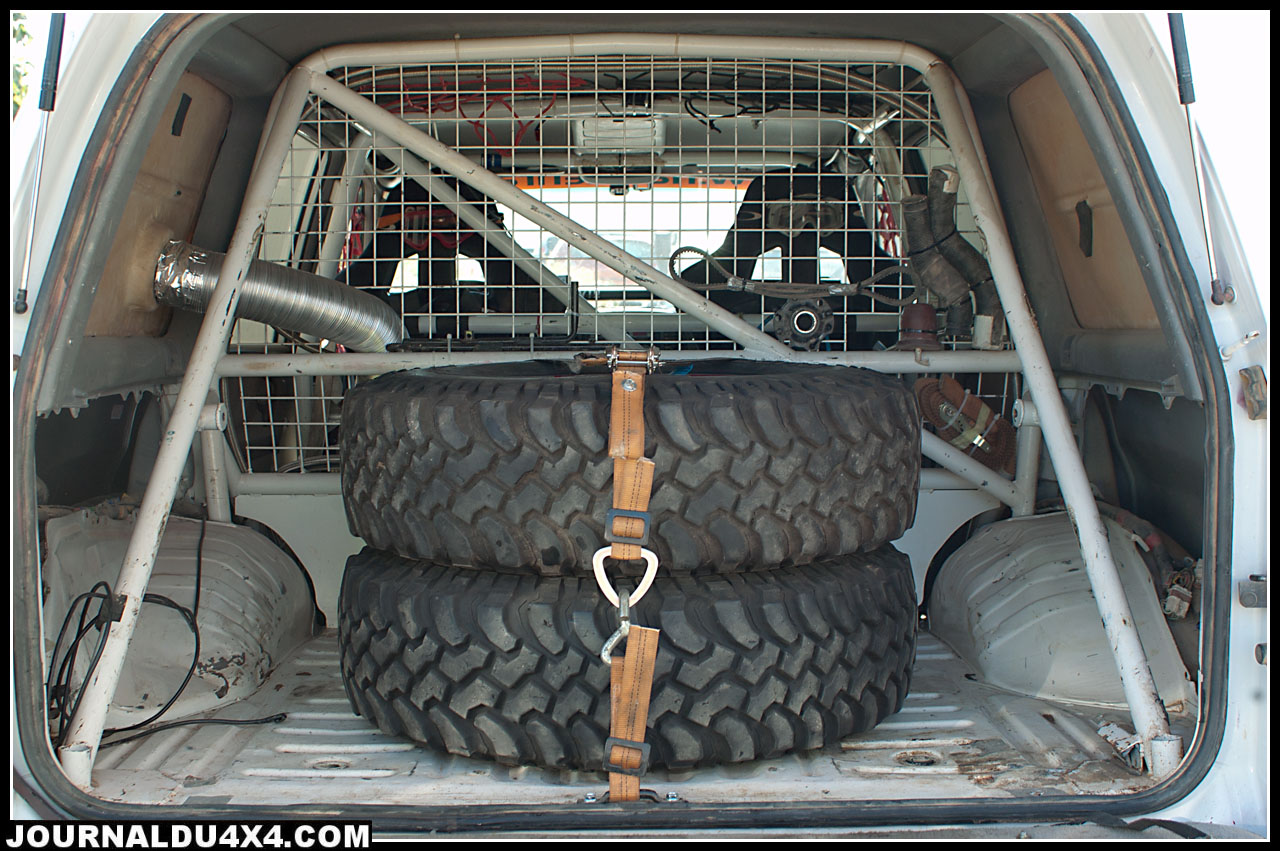 Two spare wheels in the trunk

The test in the vineyard Var

It is on the field of Cigalou in the large of the department of Var vineyard that we tested this HDJ 100 of running. Already on the road to the area, we perfectly realized the power of the cavalry under the long hood the more so as the 4×4 draws short. ( report 10/41 bridges still offering a top speed 160/170! ) At very low speed the 4×4 takes holes and bumps in successions and is shown really uncomfortable. This was even more obvious that the track was taken by many dug ditches. From the first accelerations, the behavior changed completely. As soon as the car took its rhythm, the case became stable, comfortable. The heavy losses had passed without feeling them idem for pavasses, erased by Toyo. A great happiness! The feelings are really surprising.

The power, this comfort… 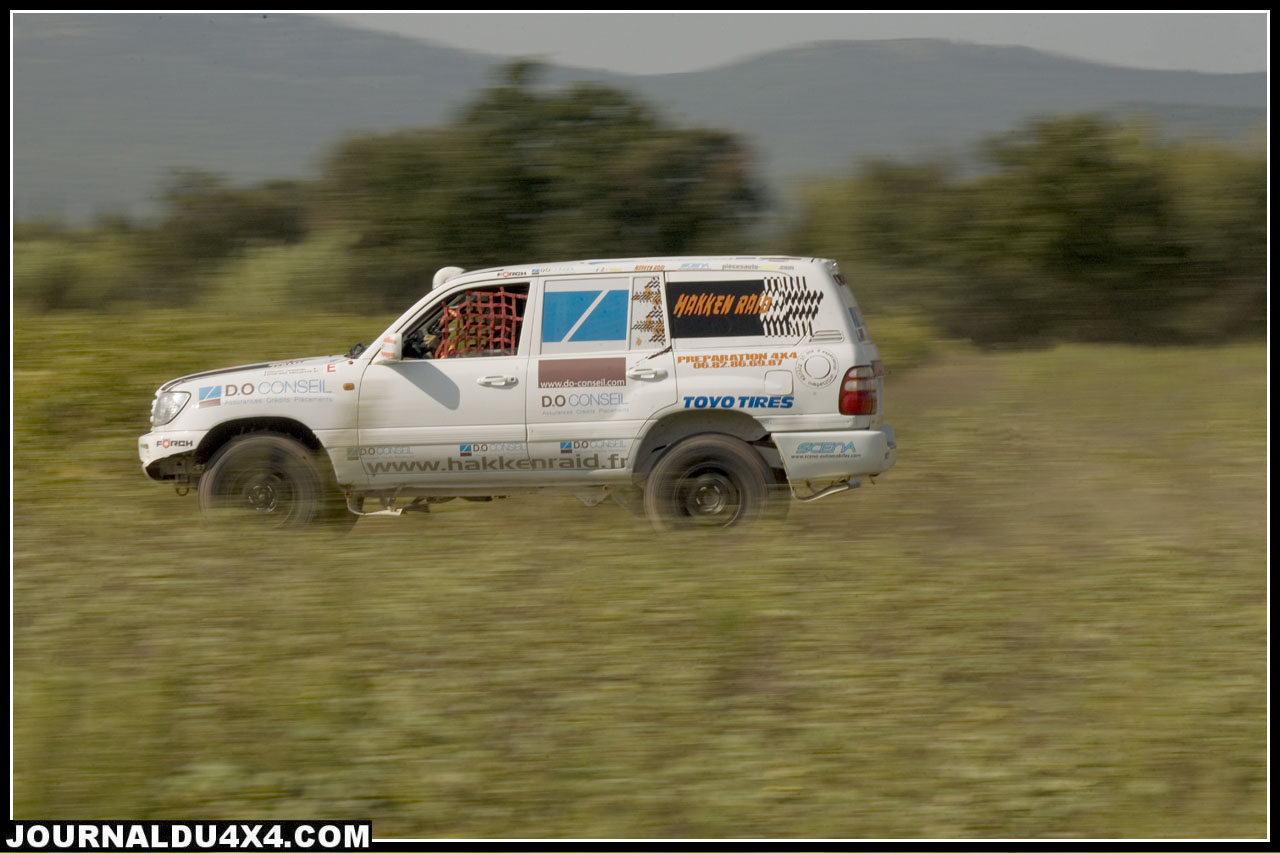 And as you drive in a great comfort and that the car seems easy … in fact the pilot has no room for error because once launched, the 2.2 T have a certain inertia, if not a certain inertia! It is necessary to anticipate as far as pneumatics are shown very directional. But, it was only one gallop of test before the great adventure and some settings will be taken again. 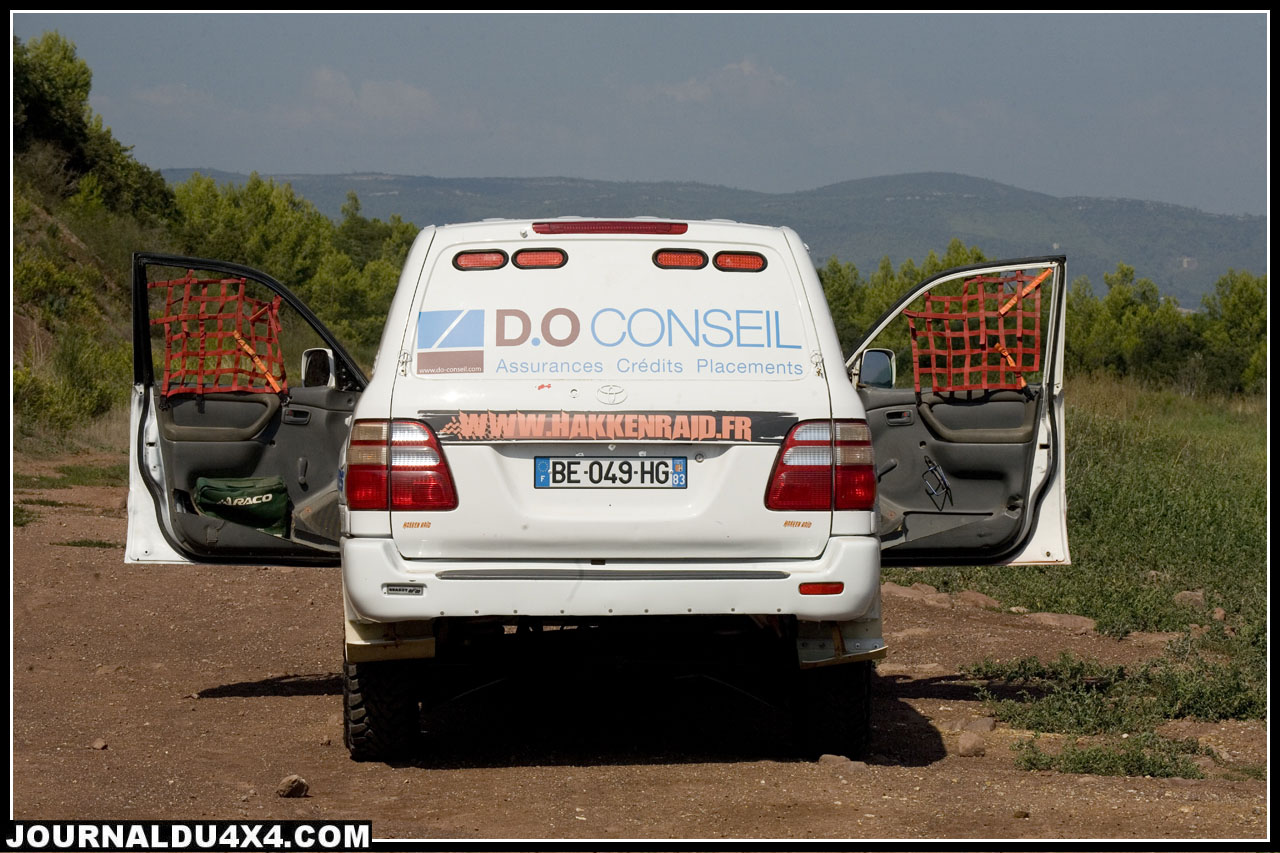 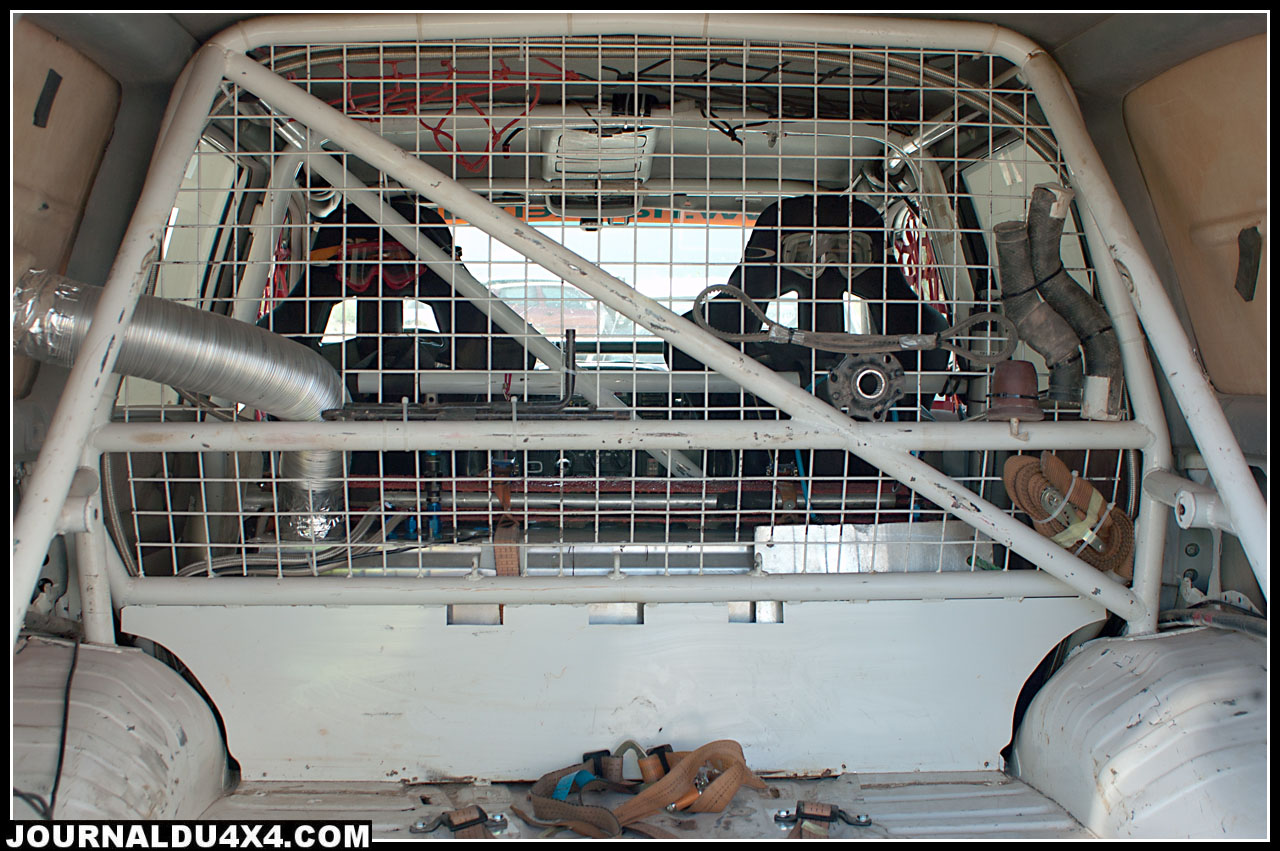 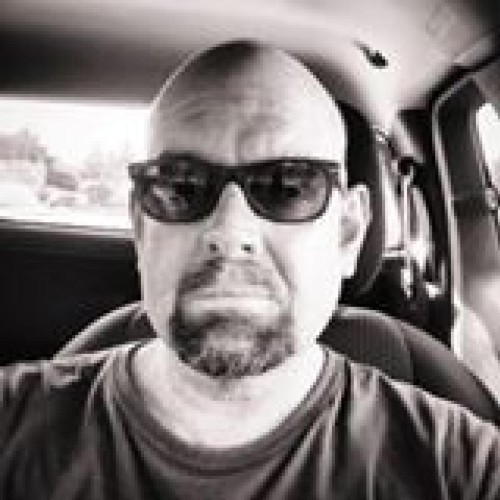 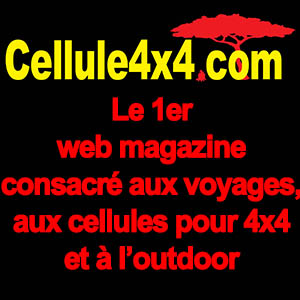 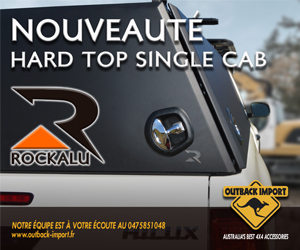 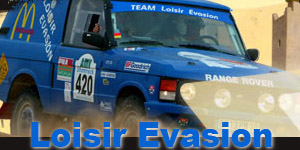 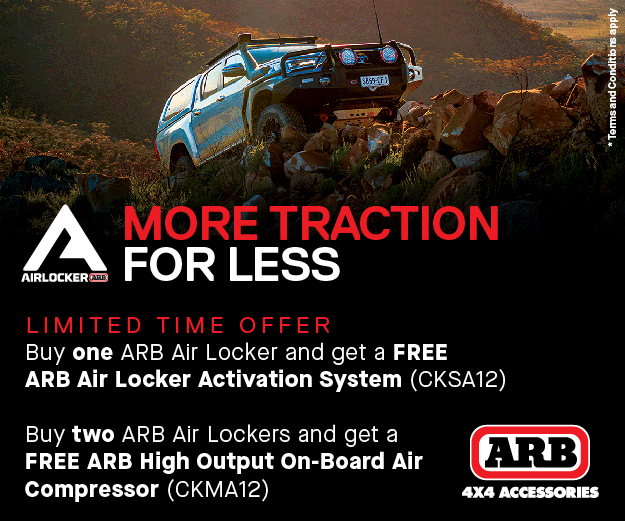 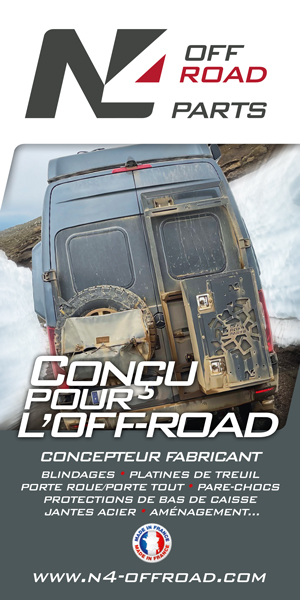 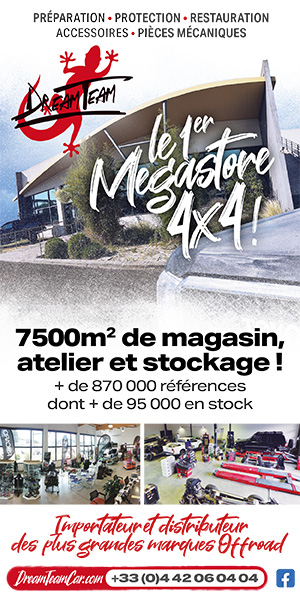